Which brand of paint yellows the most / least? 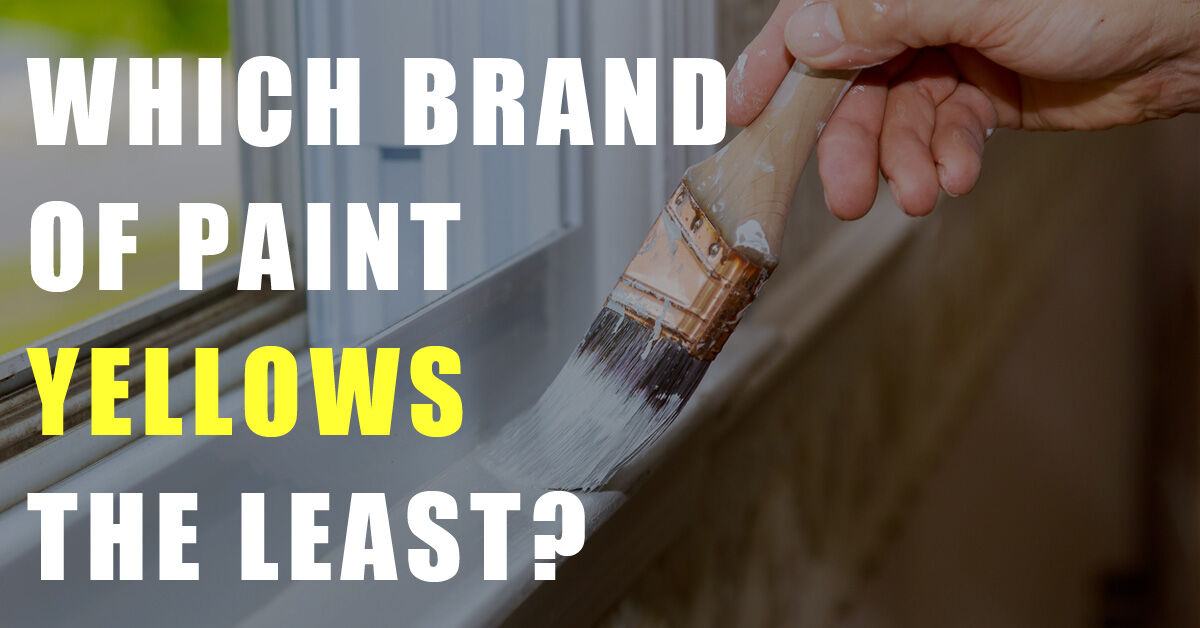 Have you ever painted the woodwork in your house white, only to notice some months or years later that it has turned a yellow or cream colour?
Yellowing paintwork particularly occurs when :
- Using oil-based paint
- The paint is not exposed to a lot of daylight

What is the reason?

Oils (or alkyds) dry using a process called oxidation and with time this leads to yellowing. Some types of oil (like walnut oil, poppy oil or cold pressed linseed oil) yellow slightly less than others, but it will still happen regardless of the type of oil. As paint dries it forms chromophores and these will be bleached out of the paint film if exposed to daylight.

When to use water-based paint on the woodwork?

When given the choice, I tend to use oil-based paint on the woodwork when working in people’s houses because it covers better than water-based paint and is more durable. However, I will suggest using water-based paint in two situations:
-The paint will not be exposed to natural daylight For example; a bathroom that does not have windows
-When I am painting both the walls and woodwork white. This is because the oil-based paint on the woodwork normally yellows faster than the emulsion used on the walls, resulting in a lack of uniformity at a later date.

I also took another piece of plywood and painted it on both sides with an oil-based gloss (Crown Trade) and decided to carry out the same experiment with this piece to see how it compared.

At the start of the test, just after the paint was applied: 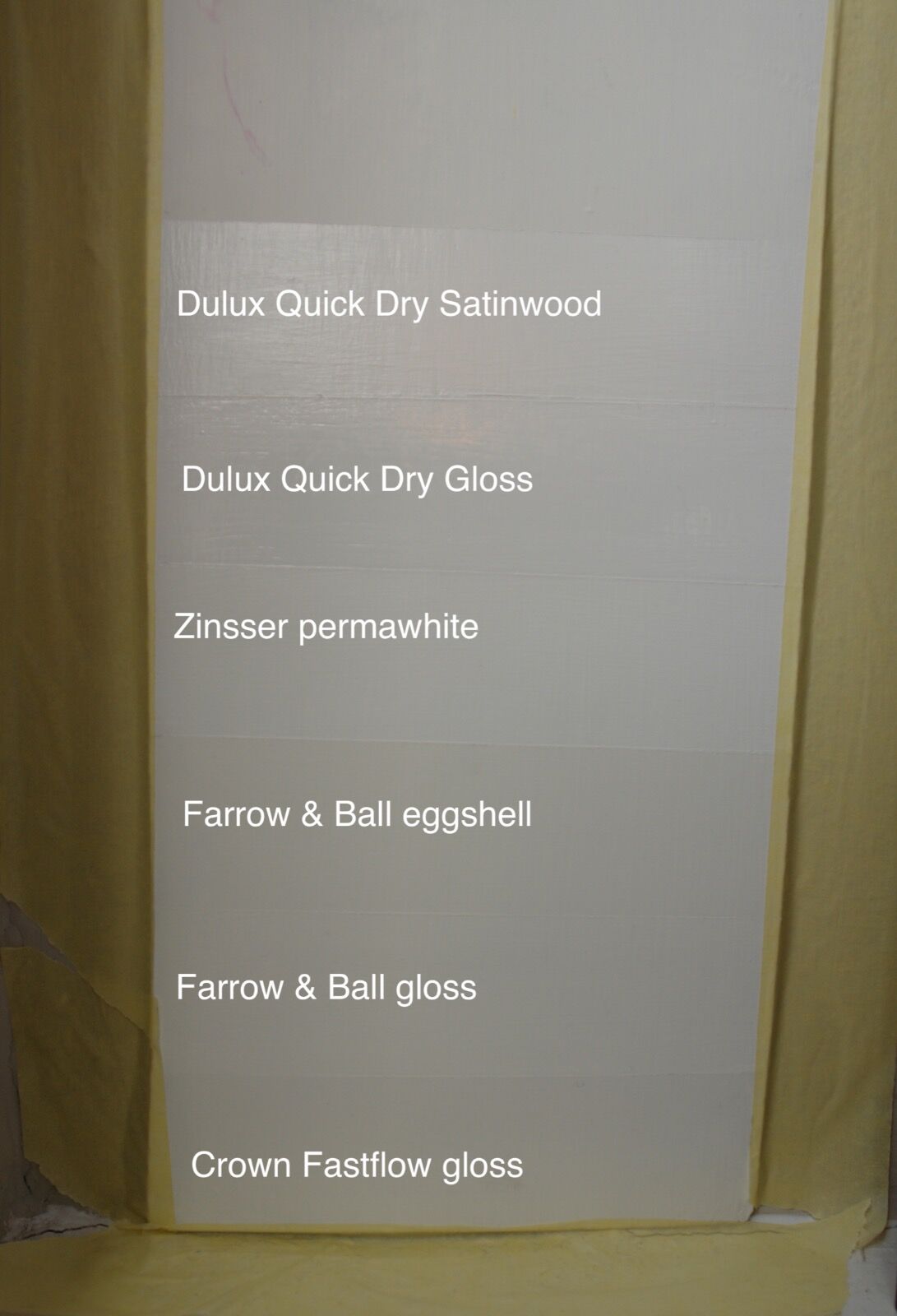 WHICH BRAND OF WATER-BASED / ACRYLIC PAINT YELLOWS THE LEAST? THE RESULTS.

SIDE EXPOSED TO LIGHT:

After 4 months, the whitest was definetly Zinsser Permawhite with Dulux Quick Dry Satinwood a very close second. The most yellow was Crown Fastflow gloss and Farrow and Ball gloss and Eggshell. The Dulux Quick Dry Gloss was in the middle.

The oil based Crown gloss had not yellowed and was still as white as the whitest water-based paint which was slightly surprising, though I suspect that if I had left the samples for a year or two, then it would have looked more yellow than some, if not all of the water-based samples.

SIDE NOT EXPOSED TO LIGHT:

On the side that was not exposed to light, I was surprised by how much Crown Fastflow gloss and Farrow and Ball gloss/eggshell had yellowed. They had all yellowed to a similar degree. 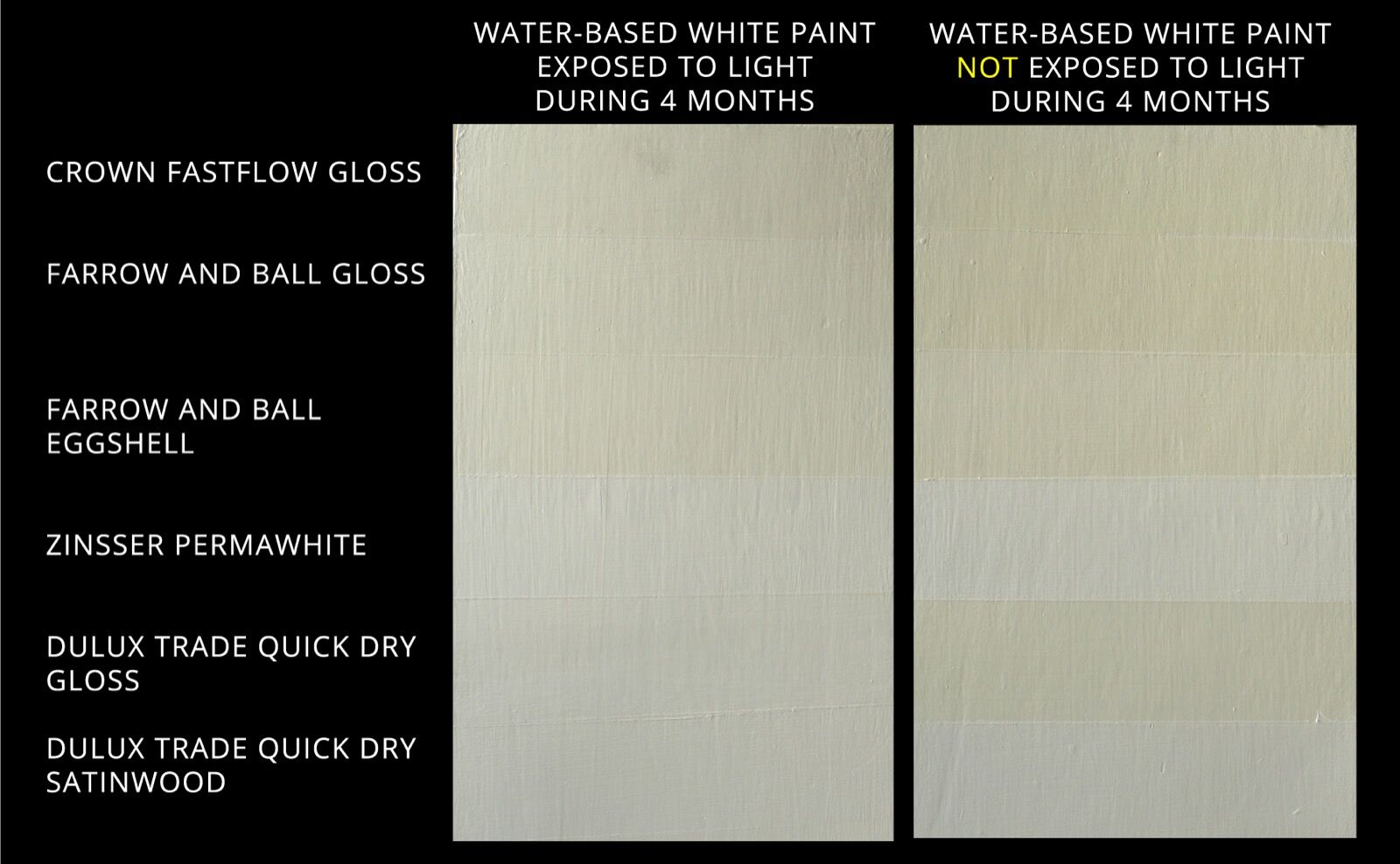 HOW DID THE OIL-BASED GLOSS COMPARE?:

On the side that was exposed to daylight, the oil based Crown gloss had not yellowed and was still as white as the whitest water-based paint which was slightly surprising, though I suspect that if I had left the samples for a year or two, then it would have looked more yellow than some, if not all of the water-based samples.

On the side that had been in the dark, the big surprise was that some of the water-based paints had yellowed more than the oil-based sample! Crown Fastflow and both Farrow and Ball Paints were more yellow! That said, the Dulux Satinwood and the Zinsser Permawhite were still whiter than the Crown oil-based gloss. I would say that it was equivalent to the Dulux Quick Dry gloss.

If you are looking for a paint that doesn’t yellow very much and you are happy with a satin/eggshell finish, then I’d recommend that you use Zinsser Permawhite or Dulux Quick Dry Satinwood. Gloss paints will yellow a bit more but the Dulux Quick Dry gloss doesn't yellow much and outperformed the other brands.

I'm not a chemist, but I have the impression that paint which describes itself as having ‘Alkyd’ in the ingredients yellows more than paints which are described as containing ‘acrylic co-polymer’, so if you can’t get hold of the above brands then it might be worth looking for ‘acrylic co-polymer’ in the description on the data sheet of alternative brands.