Which wipeable matt emulsion is best? 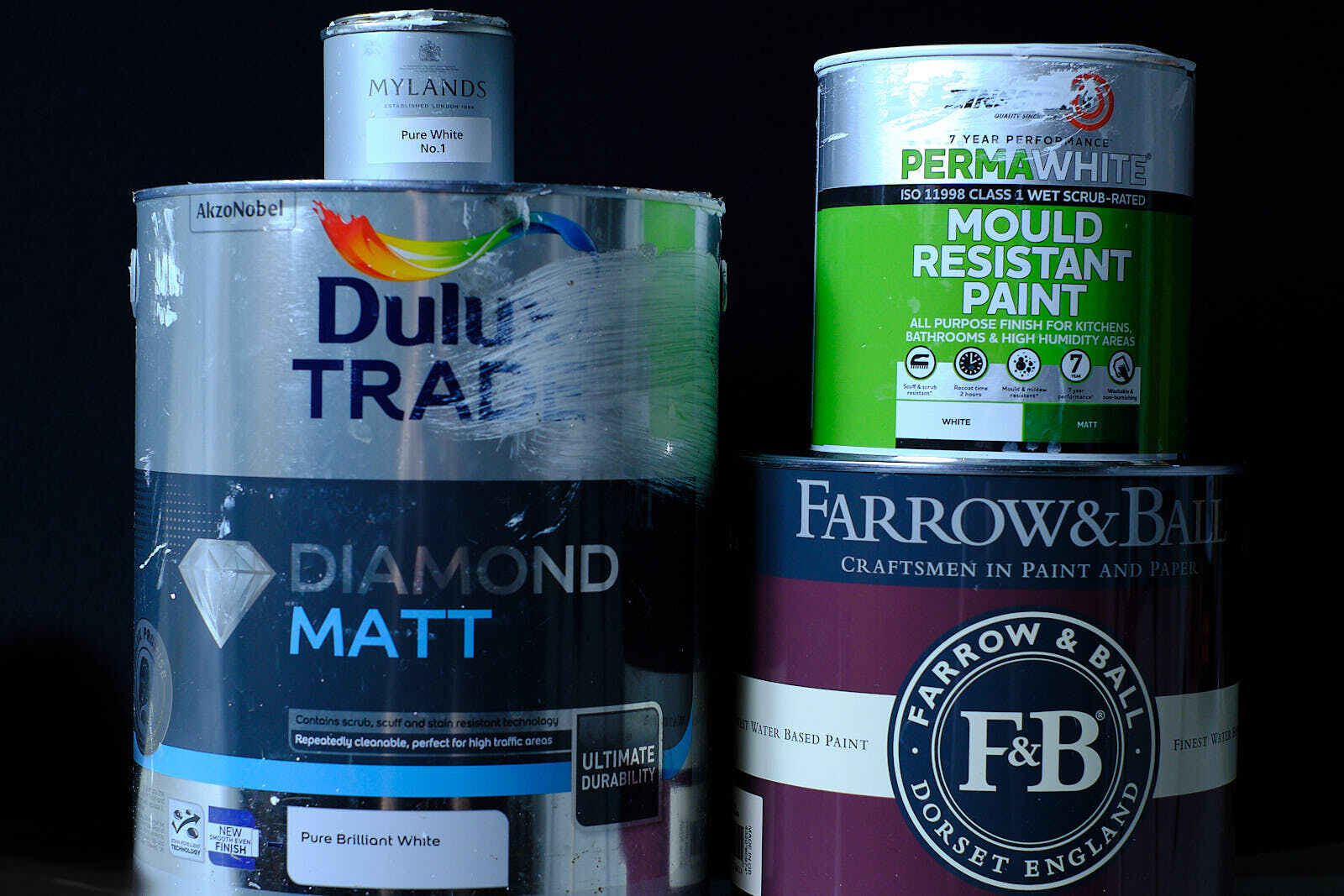 I often have to paint bathrooms which have no windows in them and given that poor ventilation can lead to mildew forming on the ceiling and walls I usually recommend to the customers that I use a wipeable paint. While vinyl silk and mid-sheen emulsion paints are often the best choice due to their ability to be cleaned, many of my customers prefer to have more of a matt finish. As a result, I often use matt paints which claim to be ‘wipeable’ or ‘scrubable’. However, I have never put these claims to the test and am often frustrated by the poor coverage that many of these paints provide.

I decided to test four brands of paint that I had lying around. I took a piece of plasterboard and gave it a couple of coats of matt emulsion. I then divided the panel into four parts and painted each part with a different brand.

HOW WELL DO THEY COVER?
Before painting the wipeable emulsion paints on the panel, I drew two parallel lines on the primed board with a black, permanent marker pen. There was not much difference between the brands in terms their ability to cover these marks– they all had poor coverage apart from Mylands which performed the best. However, I applied 4 coats of paint and in each case, the black lines were still slightly visible under the paint, even with the Mylands sample.

There was not much difference between them – they all had poor coverage apart from Mylands.

CONSITENCY:
Mylands Marble matt - The paint is thick and has a nice finish. It seems like it has a lot of pigment in it.
Zinsser Permawhite Matt - Very runny - I was surprised how thin it was and how much stirring it required!
Dulux Diamond Matt - There a slight texture that it apparent when you role Diamond Matt and sometimes if you paint over an area while it is drying it can lift the paint off. For this reason I sometimes wait for the cutting in to dry before rolling.
Farrow and Ball Modern Emulsion - For me, this probably has the nicest finish / is the nicest to use. It doesn’t show brush marks or roller texture too much and has a nice consistency .

SHEEN (in order of most shiny)
1. Farrow and Ball Modern Emulsion
2. Zinsser permawhite matt
3. Dulux Diamond Matt
4. Mylands Marble matt
Mylands Marble Matt has almost no sheen, and the other three brands have subtle sheens when you catch them in the light with Farrow and Ball modern emulsion having the most obvious sheen. It’s still not quite as shiny as a soft-sheen / mid-sheen paint though.

There isn’t much difference between the whiteness of the different brands but I’d say that the Farrow and Ball and Zinsser samples were slightly whiter than the other two brands. It’s difficult to judge however because some of the whites were warmer than the others and therefore appeared whiter under artificial light which has a warmer colour temperature.

For my test I stained the samples with the three following substances:


Tea. Since tea stains are notoriously difficult to remove I thought that this would be a good test, although given that it even stains kitchen work surfaces, I wasn’t going to hold it against the paint if the stain couldn’t be removed. I was just curious.
Coriander . Ok it’s not likely that you are ever going to stain your walls with this! But I had some in the fridge and since I didn’t have time to leave the sample in a damp place to wait for mildew to form, I thought that this might be a good example of a stain that was tough but not impossible to remove.
Felt pen. I used a non-permanent felt pen. I thought that this would be an interesting test as Farrow and Ball currently have a video on their website showing felt pen being wiped off a wall that has been painted with modern emulsion.

In each case I applied the stains and then left them for a few hours to dry.

Conclusion:
What surprised me was that it was impossible to clean any of the stains from any of the samples. I thought that the fact that I couldn’t remove the felt pen stain from the Farrow and Ball sample was ironic given the claims on their website. Perhaps in the video they wiped it off seconds after applying it before it had a chance to dry. The poorest performing brand was definitely Mylands. The performance of the other brands was fairly equal though it depended on the stain. :

Only Zinsser Permawhite Matt and Farrow and Ball Modern emulsion contain a biocide to help prevent against mould formation. Dulux now sell a paint called Steracyl however, which is essentially Diamond Matt but with a biocide added.

Note that these are the prices that I pay with my account and prices may vary for other people. I think that the price that I paid for the Zinsser paint was a special offer so this may usually cost more. ]

Apart from Mylands (which I would not recommend for environments where the ceilings and walls need to be cleaned), the other brands performed similarly and there is isn’t one brand that stands out.